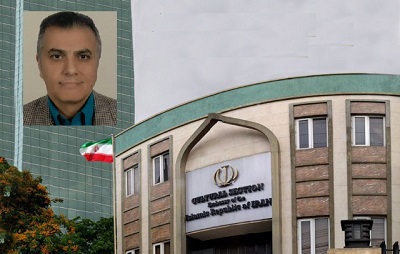 By the report ofVoice of Joya news from the National Security and Foreign Policy Committee of the Islamic Consultative Assembly, the Iranian Foreign Ministry secretary, the National Security Council secretary, Isfahan governorate, and other authorities, asks to resolve the problem of this Iranian businessman, and the result Announce it to the media. شاهین‌شهر اصفهان/end

By the report of voice of Joya of Shahinshahr in Isfahan The subject of this report is one of the Iranian merchants, by the name of Shahram Soltat, First, we introduce him in a brief outline in his own language. so the dear audience has a short introduction of this subject of our report and what has happened to him in one of the business activities in the Philippines. Shahram Soltat was born in 1340 in Isfahan; he has been in the field of importing and exporting medical, agricultural and industrial products both inside and outside the country as well as commercial consulting in import and export, and the establishment and launching of the country’s industrial production line for close to 38 years. Manufacturing

The story of this Iranian businesswoman starts from where he comes as the CEO of Nick Shad for importing bananas from the Philippines. To contract with a company called mmyphilipine, with Mr. Endangan’s management, to buy bananas. This is the stuff that makes this story sweet

The swindle, that after 38 years of experience and the history Mr. Endagan, CEO of the Philippine company last September, is done to Mr. Solat.

In this way that in accordance with the law of commerce and in all legal procedures and procedures between the two parties of the contract; and Mr. Soltat, as CEO of Nick Shad, the first party of the contract, fully complied with the terms of the contract and close to EUR 70 thousand each Euro equal to 15,000 toman a year on Mr. Solat (about one billion toman), deposited with Philippine company. To send nearly 31,000 cartons of banana a month after the contract was signed to him in Iran, but the story becomes so sweeter that, after a month’s expiration date, there is no news of bananas, or the return of money by Mr. endangan of the Philippines.

From this point on of the story, the conversation was held with Mr. Shahram Solat, CEO of Nick Shad (a private equity stock company); he initially stated: The banana purchase deal with the Philippine company mmyphilipine was conducted in accordance with the Commercial Law.

He said that Mr. Endangan, as the managing director of the company, had neither traded the goods nor paid the money, he added: “For my rights after that, CEO of mmyphilipine company has breach of agreements by consulted with Embassy staff in Charge of affaires at the Philippine Embassy in Tehran. Sent to a complaint to two NBI and DTI agencies (two guilds dealing with guilty party violations in the Philippines).

He noted that the Ministry of Foreign Affairs of Iran, the Ministry of Foreign Affairs representation in Isfahan and even the staff of the Iranian embassy in the Philippines (Manila) were fully aware of this, but so far, no cooperation and an effective step had taken place for nearly one year, and the Iranian Embassy in the Philippines, it’s unable to get rights of an Iranian businessman right.

Solat stated that the staff of the two NBI and DTI institutions wondered why the Iranian ambassador and ambassador to the Philippines (Manila) did not take any fruitful steps to enforce the rights of a fellow countryman.

He emphasized that the embassies of other countries are well-guarded for the interests of their people, to the point where they seriously deal with the problems of businessmen, tourists, elites and. etc. their countries in other countries, but, unfortunately, we sometimes see our embassies abroad in this form They do not support their compatriots, which is sad and regrettable.

The Iranian businesswoman said that since actions such as the sending of hundreds of emails and letters and numerous follow-ups, including soliciting a lawyer to address this problem, said that since the two NBI and DTI institutions and even Philippine company fraud have realized That the Iranian people do not have any support, and even the embassy, as their interests, does not take any steps to solve their problems. The work stopped the complaint and archived all activities for nearly one year.

At the end of the report, the Voice of Joya news from the National Security and Foreign Policy Committee of the Islamic Consultative Assembly, the Iranian Foreign Ministry secretary, the National Security Council secretary, Isfahan governorate, and other authorities, asks to resolve the problem of this Iranian businessman, and the result Announce it to the media.